Egyptians love us and we love them - Sedona Soul Adventures
0

Egyptians love us and we love them

I love it when I walk in Egypt and the people at the market, etc., say “where are you from?” and I say “America” and they always say “We love Americans!” and it’s true. It’s not just because we spend money there (which we do), but they also know that most Americans are friendly and fun loving and they enjoy interacting with us.
I’ve been coming to Egypt since 1983 and what I’ve found is that the Egyptian people are some of the warmest and friendliest people I’ve ever met anywhere in the world. As we close out this year’s amazing Egypt trip, I thought I’d just send you a taste of it. Our group was so lucky, we were able to do some things that simply aren’t possible unless you’re in the right place at the right time:

This year was the first time in 8 years we were able to stay at the Mena House. It was originally built by the British as a hunting lodge back in the 1860’s, it’s right next to the Pyramids and it’s absolutely spectacular.

You can’t imagine what it’s like to wake up in the morning and see the Pyramids, these structures that have withstood the test of time and are a reminder of our connections with our ancient past.
This is the view from where we had breakfast each morning.

On our very first day we were able to ride camels to the Solar Cross, which is just across from the Pyramids. We were able to do a meditation there which was very powerful.

No one knows the exact meaning of this place. Contemplating these mysteries is one of the most fun aspects of this trip. 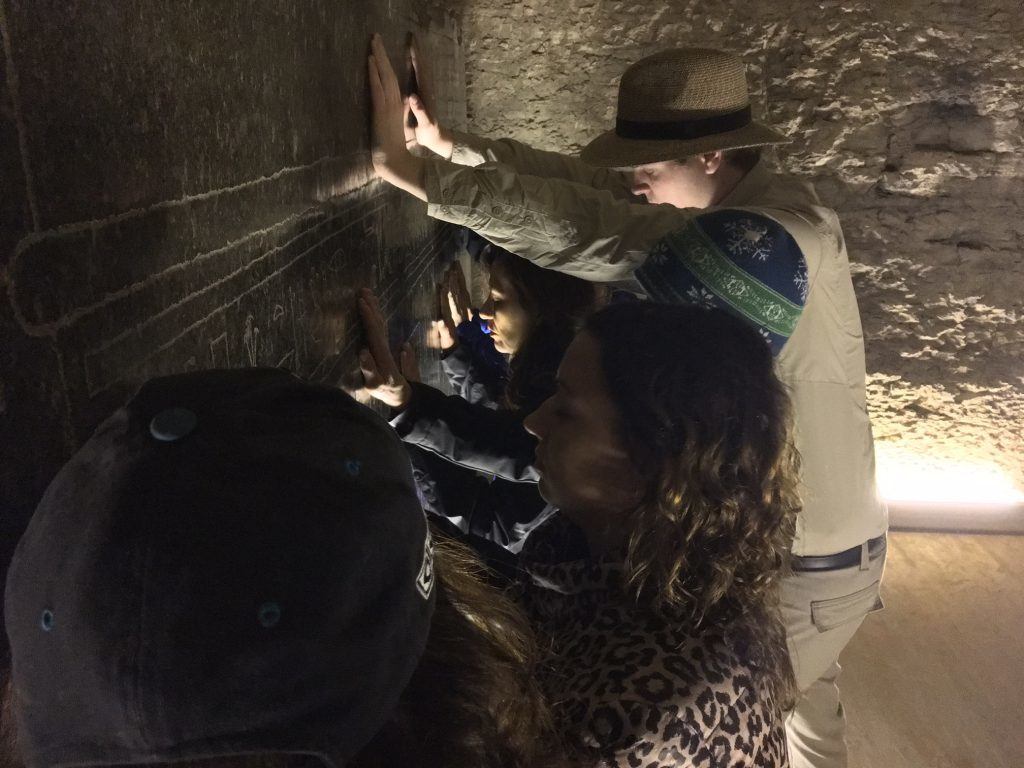 We went to the Serrapium, which is the place where the Apis bulls are mummified and buried. Each sarcophagus is huge and we were able to do a meditation here.

I love how the light is illuminating Patricia’s face. It’s so beautiful and serene.

As we left the Serrapium, we were suddenly met by a busload of school children who were on their way there. When they saw us, they all came running over and they wanted to do high five’s and have their photos taken. It was very sweet and shows you how children are the same wherever you go.

I have seen this woman, Wafaa, baking bread at this restaurant in Sakkara for each trip I’ve been on since 1995. At that time, her daughter (on the right) was a little baby, but now she is learning this skill from her mother.
Every year when she sees me, she exclaims loudly, jumps up and gives me a big hug.

I decided to get my hair done and have a manicure and was taken to a salon a few blocks from our hotel that was obviously for locals, not tourists.

Even though no one spoke English, I figured out quickly that this little boy (Mohammed, the son of the manicurist) had just gotten a new kitten (named Lily). Although he looks like he’s strangling the cat, he’s not, the cat was enjoying it!
Mohammed was very proud of the cat and was showing off for me. He kept wanting me to pet the cat, even though my nails were wet! So cute!

In the Khan el Kalili market (which is over 1000 years old) we found a woman who did henna tattoos and a few of us did that – here’s mine.

The tattoos are temporary and last about a week. Women typically do this when they get married.
It was so funny, a few days later I received a text from my next door neighbor, who just returned from India and she sent me a photo of her with her henna tattoo that she had just received. What are the chances of both of us having a henna tattoo! I love experiencing these small, nuanced differences in cultures. 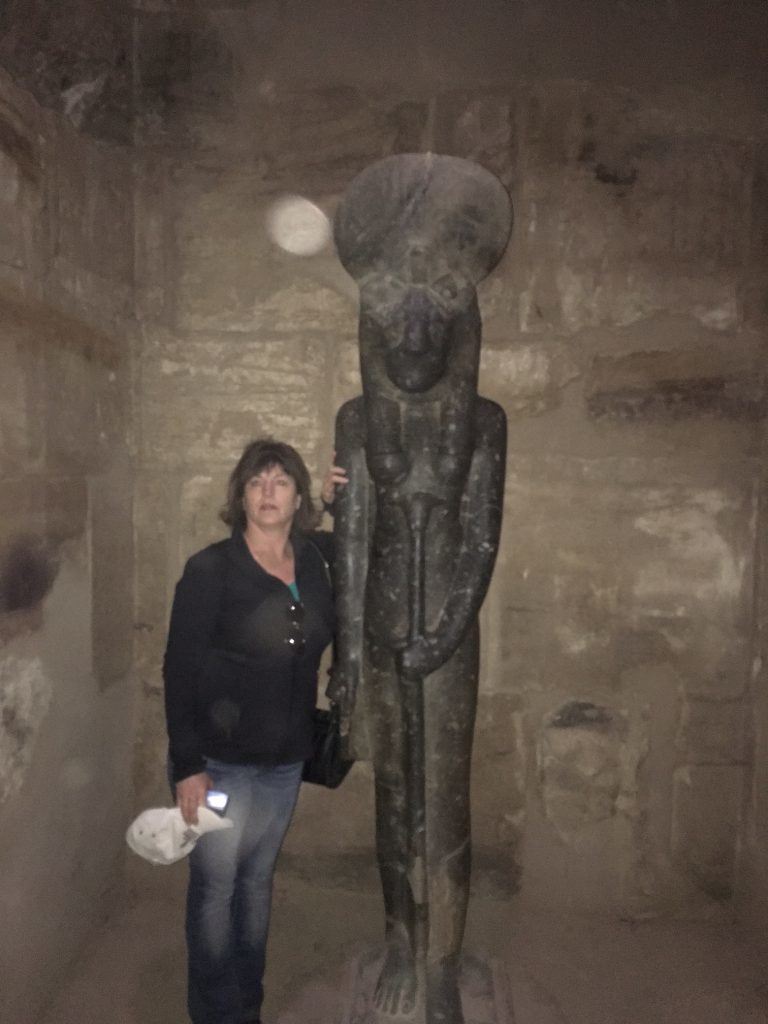 One of the incredible things that happened is that through a friend of a friend we were able to get into the Sekhmet Temple and do a meditation. There were orbs all over, see this huge one next to the head of the goddess?

What is an orb? No one knows for sure, but I can tell you definitely it is not a light anomaly with the camera. I believe they are beings from other dimensions, including beings who have crossed over, who are connecting with us, trying to help us.

My experience is they seem to only show up in the most special, sacred of places.

This is the place where in 1983, on my first trip to Egypt, I heard voices. I don’t typically hear voices, but I did here. That was one of the things that has fed my life-long interest in this amazing place.

Finding out about the past life that I had at this place has been a major part of my healing in this lifetime.

I think I fit right in, don’t you? 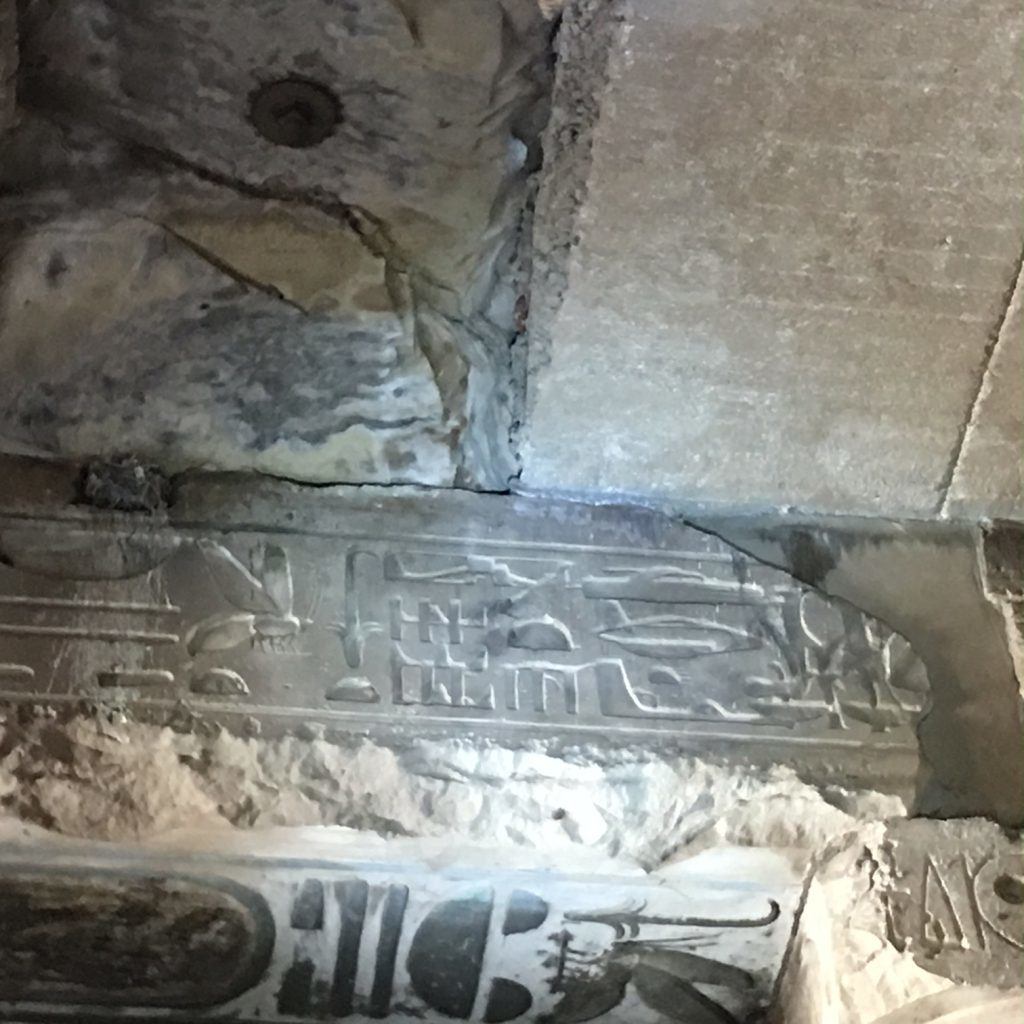 The next day we went to the Temple of Abydos. This is one of my favorite places because carved into the wall is the unmistakable images of a helicopter, a tank and a submarine. Can you see them?

No one has any explanation for any of this, it’s just mystical Egypt being her amazing self. 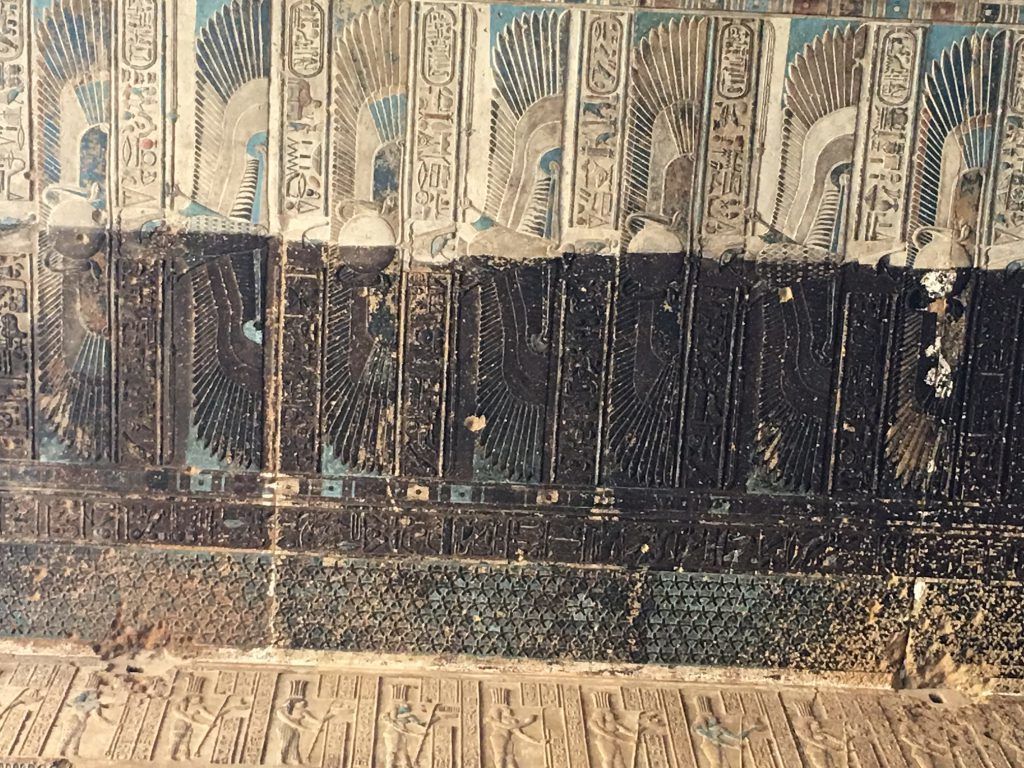 At the fabulous Temple of Hathor, the Egyptian government has begun a project of cleaning the walls from the soot and grit and grime that have built up over thousands of years. These are the original colors – extraordinary!

They left in this patch of black so that we can the startling difference.

Here is our fantastic group with our fabulous guide in the middle. Raafat is so incredibly knowledgeable and fun. I don’t believe there is a question he doesn’t know the answer to.

Here we are in front of the Temple of Hatsepshut, the most powerful of the female pharaohs.

We were so incredibly lucky that we were able to see the Tomb of Nefertari. Nefertari was the favorite wife of Ramses II, one of the most powerful of the Egyptian pharaohs, who ruled for over 60 years. The Getty Foundation completely restored her fabulous tomb in the 1980’s and it was open for awhile until they realized how much damage was being done by humidity and the tourists coming into the tomb. I saw the tomb in 2000 and in 2006, but then they provided only for private visits and the price was just too astronomical. I thought I would never see it again in this lifetime. But we were able to see it – the colors and the energy are just unbelievable. Another indicator of the good luck this group carried.

One of the most fun things we do is 5 days on a 5 star Nile cruise ship. This is the sun deck where there is a pool and jacuzzi. We had just finished a fabulous lunch when I took this picture.

It’s so incredible to sit on the sun deck and cruise down the Nile, stopping at the temples along the way.

I said to someone in the group, “someone has to be cruising down the Nile, it might as well be us!” We all feel so incredibly grateful and blessed.

At the Temple of Kom Ombo, I got to play with cobras!

It’s one of the most fun parts of the trip. 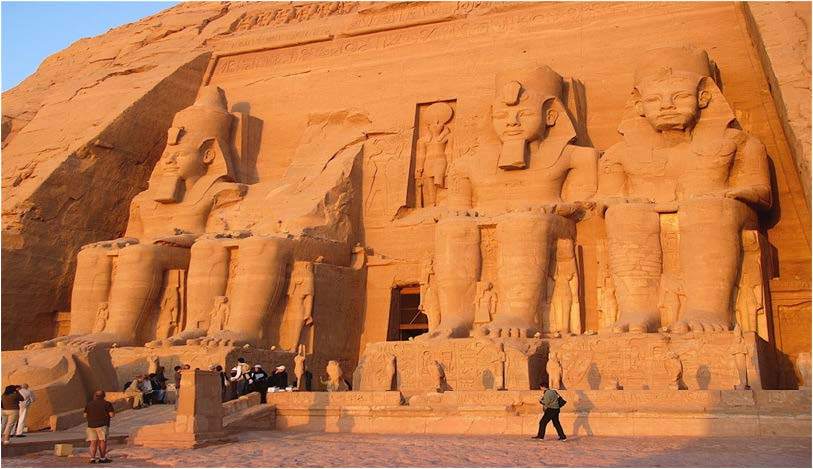 Abu Simbel boasts the largest statues in the world – it is nothing short of spectacular.

On Saturday we have our 2 hours of private time inside the Great Pyramid, where we’ll do some incredible ceremonies. It is always so amazing what happens in this sacred place.
On Sunday as you read this, I’ll be on my way back to the States. It’s been an amazing 2 weeks. It’s been filled with new awareness, new consciousness and a new appreciation for life. What an incredible blessing.
If you would like to come next year, we always do it the last 2 weeks of February. The new Cairo Museum will open before then and that will be absolutely incredible! Send me an email if you think you might like to come – [email protected]
It will definitely be another trip of a lifetime.
Wishing you a week filled with adventure,
Debra