Have you or anyone you know been a victim of sexual abuse or assault?

I’m asking because I’m so stunned by the sheer numbers of people that come to our retreats who have this as something that happened to them. And so saddened by the fact that this haunts them throughout their lives.

It’s happened to both men and women, sometimes when they were very young, and almost none of them told anyone about it.

So the terrible parts for this, for me, in addition to what happened, is then what happens after that.

I’m amazed at the number of stories I’ve been told of people telling their parent, usually their mother, and not being believed.

Or worse, being blamed that they somehow brought this on themselves.

And then the number of people who somehow blame themselves for what happened. Especially teenagers or people who were on a date and because they were being friendly or because they had something to drink, they’re blaming themselves.

And it’s people from every walk of life – every ethnicity, male, female, upper class, middle class, lower class – it’s so pervasive that I actually feel it is a type of epidemic.

I was reading recently that when Freud did his initial work, he was working primarily with women in the upper class of Vienna and he was discovering that huge numbers of them were saying that they had been sexually abused by a family member, usually a father or a brother. When he first started talking about it, there was such an uproar, that he changed his analysis. He started talking about it as though the women had made it up, that they were “hysterical.”

And the worst part is the cover up. The person tells someone, they’re not believed and so they shut up about it. And then they carry it with them, this huge weight that is dragging them down.

And then, like I said, they carry it around.

We’ve had people come to us where this happened over 40 years ago and they’re still suffering, or 30 years ago, or 20 years ago, and they still feel it like a scar, like a wound.

If this is something that has happened to you or someone you deeply care about, I want to reach out to you to lay this burden down. This pain doesn’t need to be carried around any longer.

This energy can be released and you can come back into connection on all levels – physical, mental, emotional and spiritual. Because it affects people on those levels.

We have helped so many people who have had this happen to them. If this is something that is still haunting you or someone you deeply care about, please call us and let us help.

Call and speak with one of our Angel Guides. For some people, this is the hardest part, speaking about it, sometimes for the very first time. Our Angel Guides, are incredible, they are so compassionate and caring, you’ll feel better just having spoken with them. And it’s so freeing to finally talk about it with someone who cares.

When they speak with you, they’ll tune it and determine exactly how the impact of this is showing up for you, because it’s different for everyone. Some people are depressed, some people are angry, some people are ashamed. For some, it has greatly impacted their relationships, for others, it has greatly impacted their feelings of empowerment or inadequacy, for some, it has even impacted how they show up in the world. And it can definitely impact how you are as a partner and as a parent.

However it’s showing up for you, they’ll get to the root of it and put together a retreat of private sessions designed to move out the old, hurtful energy and moving you into connection on all levels – physical, mental, emotional and spiritual.

Julianne says that after her Soul Adventure she feels happier, enlightened and TALLER! “I was freed from this shame I have carried through my life.”

“I was totally meant to go to Sedona. It is a magical place with incredible people. During my retreat, I felt myself change, a warm yellow light grew from inside of me. By my last day, I felt taller, happier, enlightened, I felt I finally awoke that wonderful, beautiful spirit deep inside of me that was afraid to come out. I was freed from this shame I have carried through my life. I wish for every human person to go through an experience like mine, it was worth every penny. I will go back to Sedona without a doubt.”
~ Julianne V., Ottawa, Canada

I love it so much that Julianne’s retreat helped her so deeply and isn’t it sweet, she says her Soul Adventure made her feel TALLER! That’s a new one.

But that’s exactly what happens. Shame (or depression or feeling “less than,” etc.) does that to you. It makes you feel smaller. It makes you feel less than. When those blocks are gone and that “wonderful beautiful spirit deep inside of you” comes through, you’re suddenly lighter and happier, and that literally makes you stand up taller! It’s so amazing.

Where We Bring The Magic of Sedona To You! 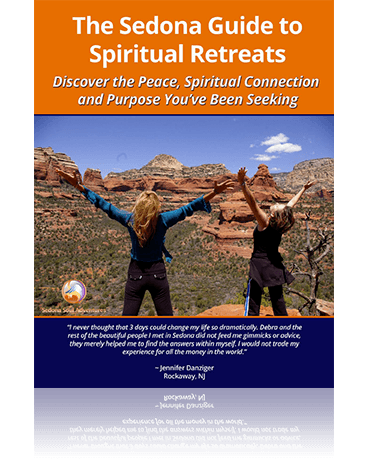